Doors of Mercy - Music Only Pack

This Is The Time - Music Book for Schools

We have been to the mountain top and it is amazing! This particular mountain top was the Los Angeles Religious Education Congress. Imagine 40,000 people (almost all of them Christians of the Catholic persuasion) living Pope Francis’ Joy of the Gospel for three days. And that joy was not just because the Congress takes place at the Anaheim Convention Centre, which is across the road from Disneyland. For those three days there was serious competition for the title of ‘happiest place on earth’!

It was great to meet up with so many Aussies who were attending. A highlight was the lunchtime Arena concert. Michael joined with John Burland and Andrew Chinn and the CASPA team from Sydney to entertain a lunchtime crowd of 5000. What fun that was! 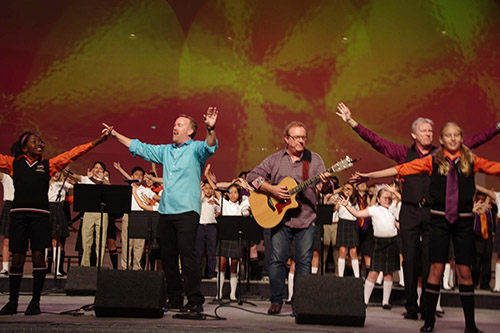 Michael, John, Andrew and the kids setting hearts on fire!
Those three days at the mountain top were awesome (in the real sense of the word) preparation for those three days we are about to celebrate. Whilst we worshipped like it was the Palm Sunday parade or Easter already, the liturgies were never-the-less Lenten. Deep down we were aware of the outpouring of love that was Good Friday. Jesus was among us in the Word we heard, the communion we shared and in the people who surrounded us.
LA congress is definitely something you should put on your bucket list. Here’s a Youtube link to give you a little taste. Next year’s dates are March 13-15, 2015.